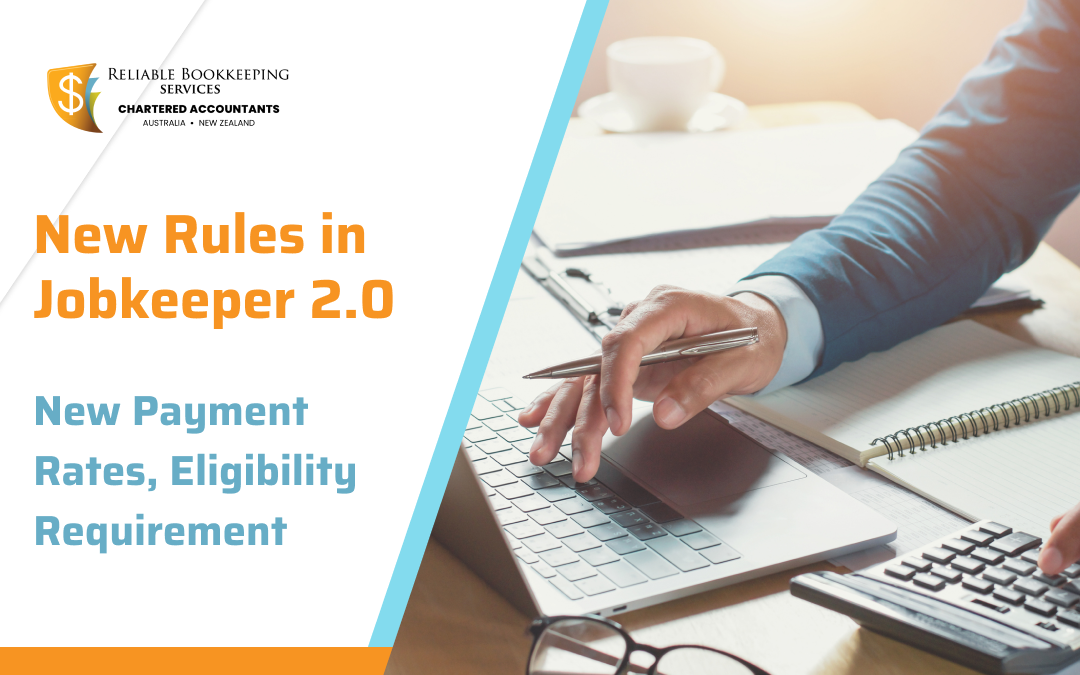 The treasurer released the detailed rules that deal with the extension mentioned in the JobKeeper scheme till March 28th, 2021.The guidance by ATO and the explanatory statement flesh out the previous wordings of the treasury on the manner in which the JobKeeper Scheme will be applicable.
Furthermore, the modified series released on August 14th, 2020 that altered the rules meant for eligible employees from August 3rd, 2020 onwards. According to these alterations, the employees who were not eligible for JobKeeper have now the eligibility from the mentioned date.

We will discuss the previous JobKeeper scheme and the expanded one

We also require focusing on certain rules that determine the eligibility to access the JobKeeper after September 27th, 2020.
Conditions:

While considering passing the original decline in the turnover test, it includes a comparison of projected GST turnover for a month or a quarter in 2020 having GST turnover for the corresponding period of 2019.
For a certain month or quarter, if the test has been passed, it is not required to get examined again. Previously, the reduction in the turnover test was required to satisfy anyone amongst the following period:

In the JobKeeper 2.0 new rules, the entities are required to pass the test for the following periods:

However, the turnover reduction thresholds remain the same and are not altered. These are:

After passing the original decline in the turnover test, the next step is to analyze whether they can clear additional reduction in turnover tests:

For new rules, the following examples are considered as explanatory statements:

The ATO has been powered with modifying the rules of timings to analyze when supply is treated as having been made. The legislative instrument by commissioner deals with this area. While applying for new turnover test reduction for September and December 2020 quarter, the individuals are those who are registered for GST should make use of the same method that is used for GST reporting purposes. The scenario covered by particular rules is as follows:

The payment rate of $1500 will be applicable to employees till September 27th, 2020 irrespective of whether they are eligible employees using the March 1st, 2020, or July 1st, 2020 test date.

The way JobKeeper 2.0 new rules will operate from 28 September 2020 onwards is that the higher rate applies if the employee’s total hours of work, paid leave, and paid absence on public holidays were at least 80 hours in any reference period.
.
If the pay cycle is longer than 28 days, a pro-rata calculation needs to be done to determine the average hours worked and on paid leave across an equivalent 28 day period.
For example, if the relevant monthly pay cycle has 31 days, you take the total hours for the month and multiply this by 28/31. There are two standard reference periods that apply for employees. If the employee worked at least 80 hours in either of these periods, then the higher rate should apply. The explanatory statement for the rules confirms that both reference periods can apply, regardless of which employee test date is used (i.e., 1 March 2020 or 1 July 2020).

The first reference period is the 28 day period ending at the end of the most recent pay cycle for the employee ending before March 1st, 2020.

The second reference period is the 28 day period ending at the end of the most recent pay cycle for the employee ending before1 July 2020.

According to JobKeeper 2.0 new rules, From 28 September 2020, the higher payment rate will apply to eligible business participants, if:

The assistance by ATO in this area states:

“If the tier 1 rate applies to you as an eligible business participant, you must keep records. These records will show how you made your assessment of the hours that you were actively engaged in your business”.
These records consist of:

The altered tests released by the Commissioner of Taxation are quite similar to alternative tests released in connection to the original decline in the turnover test, but there are certain differences.

The legislative instrument has made it confirmed that the rules released by Commissioner in connection to determining the timing supplies for JobKeeper reduction in turnover tests are applicable to new alternative tests also. It means that if an entity is registered for GST, it is required to calculate current GST turnover using the same accounting method used for GST reporting purposes.

The modification has also been made to the “irregular turnover” test and the wording used for this test has been updated. In the original version of this rule, it was considered that whether the individual’s lower turnover quarter was not more than 50% of the highest turnover quarter for the quarters ending in 12 months before the applicable turnover test period. In the updated version, it is considered that whether the individual’s current GST turnover for a consecutive 3-month period before the applicable test period or March 1st, 2020 is not more than 50 % of the highest of the entity’s current GST turnover for a period of 3 months.